This is a question my friend Brian and I have asked ourselves, many times in the past decade or so we have read IDW's Transformer books. Brian is such a huge Transformer fan, that he makes me look like a poser. He has multiple Optimus (is it Optimuses? Optimi?) on a shelf in his bedroom, all ranging in price for how much he was willing to spend on the Half robot/ Half truck that sounds like Peter Cullen doing his best John Wayne impersonation.
Brian loves Optimus as a character, but he doesn't like the IDW Optimus.
I think I would have to say the same. Sure, this Optimus is leaps and bounds better than the savage murderer from the Michael Bay movies but he is nowhere near as great as the Optimus of the 1986 cartoon movie.
He is constantly second guessing himself. He never thinks he is worthy of the title of Prime. This is quite a noble trait in someone who is considered a religious figure by many of his people, but by the time of this trade, it is Optimus' core characteristic.
In this trade, Optimus has no choice but to take over Earth, in the name of the Autobots. By doing this, Optimus is able to expose Galvatron, and take action against human forces that have created tech that can take down Transformers. It is a powerful move for Optimus to make, but there is one big problem..... Who cares?
John Barber has tried very hard to make the Earth opposition to the Transformers interesting, but it is the same as it is in the live action movies, as it is in every version of Transformers - no one cares about the Humans in the story. This is something that Superfan Brian has always stated, and I would have to agree with him there, too.
GI Joe does exist on this version of Earth, so you could have a great GI Joe versus Transformers story, but from what I have seen in the garbled mess of some of the IDW crossover books (here is looking at you "Revolutionaries") it always comes down to some sort of convoluted plot involving other Hasbro properties, like Rom the Space Knight and the Micronauts. There is never a straight up Human Military Forces i.e. GI Joe versus Transformers story, in IDW continuity.
This has been the problem with the IDW Transformers ongoing. This is why it is always outshined by its sister book, Lost Light. Everything is so much more exciting in fun when you have Transformer V Transformer action in space. No one cares about the humans. I am sorry John Barber. You do an excellent job trying to make Optimus and Soundwave and Thundercracker compelling characters but making a Transformers story that takes place on Earth compelling is fighting an uphill battle. 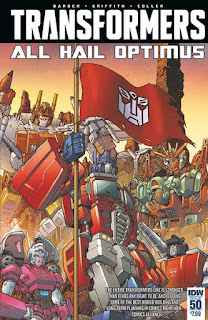