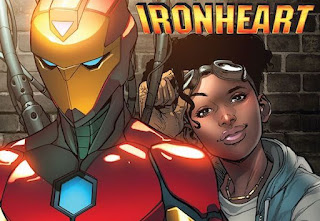 I am trying to remember what I was like, when I first started reading comics. I was ten years old, in 1992, and I was slowly and steadily building my knowledge of the Marvel Universe, by collecting their various Superhero Card sets. Series 1 -3, then Marvel Masterpieces, the Solo Spider-man Card series, the Solo X-men card series. What a wonderful time to be into comics! This was the proto-Wikipedia- reference Materials that also happened to be connected to some fabulous artwork. Of course ten year old me would want to buy them!

What would ten year old me think of a Riri Williams card?
Would I like the design of her suit? Would I be intrigued that she was African American, or would I automatically lose interest, since I was a ten year old suburban white boy?
I will admit that I probably would be intrigued, but I most likely wouldn't pursue the series, unless she was featured in a cool cartoon, like the 90s X-men cartoon show, or Batman: The Animated series. Having a cartoon counterpart really upped the stock of certain superheroes, for me.
What does this have to do with an actual review of this trade?
Well, I guess my question is - Is it true that Riri Williams is a Mary Sue, made specifically for the Marvel SJW initiative that they began over a decade ago, replacing established White, Male characters with more diverse characters?
That should be followed with another question - If that is true, does that matter?

I have to make two points when I am reviewing this specific book. First off, I have to set aside my normal complaint about Bendis, which is in pretty much every review I have written about his work. That complain is, that Bendis will stretch out a story that could be told in two issues, into six issues, and you can feel it. The usual tell tale sign is panels that are filled with characters repeating the same information back and forth, but they have to resay the same thing, five different ways, because the person they are talking to is either confused or can't believe what they are seeing.

I see it every time I read his work, and after looking through my Goodreads account, Bendis is actually the writer whose stuff I have read the largest amount of. I have read and reviewed over 100 Bendis trades on Goodreads, and that number is growing.

I am able to overlook his redundant dialogue because of two things - It is usually quite witty and because he can also convey a ton of emotion within a panel that has no dialogue at all. He hits you with panel after panel of redundant, witty dialogue, and then gives you a splash page of random violence, or pure wonder. There is a reason I have read so many of his books.

The other important point to focus on is, how does Riri stand, on her own as a character? By the time I am writing this review, Tony Stark is already back as Iron Man. I am assuming Riri is going to get her own Ironheart series.  this isn't any kind of shock. So, would I be excited to read an Ironheart Trade, if I was able to find one in the library?

If written as well as Bendis has, in this trade, I would love to follow Riri in another adventure.  I want to see what happens with her and her mother. I want to see her interacting with other Teenage Marvel heroes, like the Champions. Sure, she happens to be a techno genius on par with Tony Stark, and yet she is a teenage girl, but so what? Is it just because she is African American and a woman, that people have an issue with this? How many teenage (or younger) male geniuses do comic book readers accept? How many white, female Teenage (or younger) geniuses do comic book readers accept? I am thinking of Valeria Richards, as a prime example.

If Riri wasn't a genius, how would she have been able to create a suit similar to Stark's design? That is the ultimate point here, a point that maybe 10 year old me would have overlooked - Riri, whether she is a female or male, whether she is African American or Asian or Latino, it doesn't matter. her key component is that she is a socially awkward genius, that comes from an inner city background, and was able to create an armor similar to what one of the founding members of the avengers uses. Those who wont allow an African American girl fill that role certainly shouldn't be following a book about a character who is a futurist, like Tony Stark.