First and foremost, I have to go through my usual Schpeel. I have been reading to my 9 year old daughter, every night , for her entire life. Once we got up to the age where we could start plowing through entire novels, I started keeping track of the books we read together. I made a list of these books and put them in order from Favorite to Least Favorite. These are all of the books she and I have read together, minus the Harry Potter series. Here is the current standings:


I think that if I try to compare Percy Jackson to Harry Potter you are going to laugh at me. It is understandable. Though they are cut from the same cloth, Harry Potter has that fine, meticulous stitching and thought out patterns, whereas Percy Jackson is just Large swaths of the same colored cloth, with a few embedded gems you didn’t notice from far away.
Let’s go over those embedded gems. Also, you aren’t going read this review if you haven’t read the book, right?


One thing I love is that Rick Riordan throws in little jabs about human nature and our ability to pollute and create junk. This is a major theme throughout the first book. I am on book three, with my daughter, right now, and it feels like there is a greater focus on the mythological/ magical realism world that Riordan has created versus a commentary on our own world, after book one. Book one is a road trip through the United States, with a quippy bit of commentary for each stop that Percy and his friends make a long the way.


The commentary is one thing that makes book one special for me. The humor that is prevalent for the series, elevates it to another level. The jokes are quite clever and change the series from “This will never be as good as Harry Potter” to “Hey, this is its own charming thing”.


Percy Jackson and American Gods, at least from what I have read, are a good example of stories that have come out around the same time frame, that have similar ideas, and yet the authors do not seem to have influenced by, or influenced the other. Neil Gaiman created his modern take on Odin and Company, while, unrelated Rick Riordan made his modern spin on the Greek Pantheon.


I am a big fan of his take on Ares, with his Sons of Anarchy Style and his flaming red eyes. Zeus is not featured much, but I think he fits in well with the modern depiction of Mount Olympus, just hovering above the New York City Skyline. The depiction of what travelling underwater would be like for the son of the God of the Sea is unlike any other depictions of underwater life that I have either read about or seen in a movie. 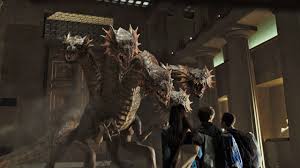 Reading future installments of the series makes me appreciate when the Villains are not standard Greek Mythology monsters. That is another major part of Book one. Percy, Grover and Annabeth have to survive Monster attack after Monster attack, and I am sorry, but the monsters are not as compelling as the actual Greek Gods themselves.


I don’t know how I feel about the fact that Riordan attempts to connect ADHD and Dyslexia to having the hyperfocus and senses of a demigod. This reminds me of a controversy from a year or two ago, when the movie “The Predator” came out. The main character’s son had autism, and it was treated like the next phase of human evolution. That didn’t go over so well with critics and fans of the series.


Percy’s supporting characters are great. Annabeth and Grover are no Ron and Hermoine, but when reading future installments, and seeing either one of them get sidelined, I start to miss them. Ultimately, I need to see where Books four and five ago. Will the crisis that is alluded to in Book one have a major pay off? I don’t have the oracle here, to give me a cryptic prediction. I know that, along the way, I will laugh out loud a few times.

So, where does lightning thief fit in this line up?

Just above 'Black Beauty' and below 'Ramona the Pest'