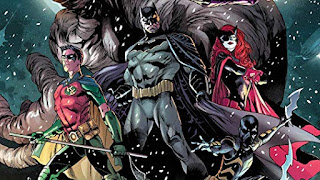 This book is a sort of catch all for all things great in the Batmen books that were misused or neglected, during the New 52, with the exception of Batwoman. Cassandra Cain's Batgirl and Spoiler? Whoa, what a treat! Tim Drake's Red Robin (ok, he still has that stupid Red adjective thrown in there, but how else are you supposed to tell him apart from Damian?) done right? Count me in. Clayface as a good guy? Sure, can you even make a danger room, using his powers and call it the Mudroom? I know it is a weird request, but you know, I will give it a good review on Goodreads.
James Tynion IV, I have to say that the envious part of me would say that he is an example of the "It's who you know" aspect of the comic book industry. I sort of enjoyed his Talon book. I really enjoyed his back ups in the Batman book that involved the court of owls or took place during "Endgame". This book, however, is his true chance to shine. I think this is the first time, in a very long time, when the Batman proper title and Detective comics have both been very strong.
The concept behind this book is solid - all of these damaged Batman supporting characters are brought together by Batman, to work as a military unit. He lures them in, by talking about their strengths, but he is also very aware of the damage they could do to others, if they are not guided by a black gloved hand, connected to razor gauntlets. Each of the characters: Orphan, Red Robin, Batwoman and even clayface get to remind us of why we loved them all so much, before the New 52 changed everything for them. I will give this a 4 out of 5, a "really liked it" on Goodreads.com.