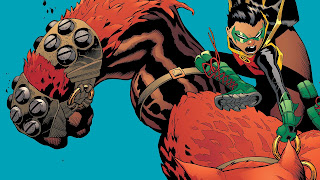 Patrick Gleason. I thought you needed Peter J. Tomasi to make magic. Boy wonder, was I wrong. I did a list of my top ten favorite Marvel superheroes in my very first review. I am going to show you my top ten DC superheroes list, now:

Notice a pattern there? Yeah, I have a thing for people from Gotham. Patrick Gleason takes Damian far out of Gotham for this book, as he goes through his "Year of Blood", a self imposed year of penance, making up for his past crimes. It is pretty fantastic stuff, quite adult and deep for a character that is probably about twelve years old, at this point. The characters I listed above have gone through some major changes, during the New 52. In the case of Zatanna, Huntress, and Black Canary, these changes were not for the better, and luckily talented writers were able to return these characters to their glory, during DC Rebirth.
Damian, however, has stayed consistently great, whether he is in the hands of Grant Morrison, Peter J. Tomasi or Patrick Gleason. I give this a four out of five stars, a "Really liked it" on Goodreads.com.