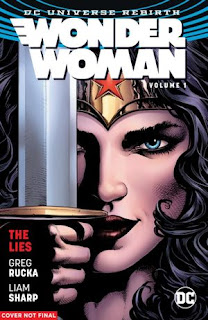 I won't lie. After reading this first volume of Wonder Woman Rebirth, I wasn't as impressed as I was expecting to be.
Rucka is probably the best modern comic book writer, when it comes to telling stories with strong, believable female leads. Learning that he was on the book made me excited, especially when considering the buzz around it had mentioned that he was going to address what was considered cannon, and what was not, in the new, DC Rebirth Universe.
Unlike the other two members of the DC Trinity, Wonder Woman has had many changes to her mythology and origin story. What she is able to do, and what her connection to the Greek gods actually is has varied drastically over her entire time as a DC comics character.
I have enjoyed some interpretations of the character, including the infamous reddish brown Jacket,  era written by J Michael Straczynski and then Rucka's run, during the Pre- New 52 timeline. I enjoyed the beginning of Azzarello's run on the character, but the retcon that Diana was the daughter of Zeus never sat right with me. I think it is unfortunate that the live action movie incorporated this concept into her origin. Also, I agree with Grant Morrison, though I did not enjoy his Earth One take on Wonder Woman, that the Amazons should be living in a futuristic society with flying cars and lazers that can heal people. The Amazons in the live action movie were far too primitive, technology- wise. Look, this review is about Wonder Woman's first Rebirth story, not the movie. I need to get back on track.
Wonder Woman, Vol 1: Rebirth is the kind of story that requires you to read the entire run to see the real beauty behind it. At this point, I actually have read all of Rucka's Rebirth Run (say that three times fast) and I can say that it all pays off. In the case of this particular book, though, I could not recommend it to someone who was unwilling to stick with the story all the way to the end. Because Wonder Woman's origin has been altered so many times, it is confusing when you try to determine what elements of her backstory are being referenced in this run.
One of the things I did love about this book, which I tend to love in any Rucka story, is the use of military jargon, and procedures. We follow Steve Trevor, and Etta Candy around a lot in this book, and they speak like they are straight out of the movie "Zero Dark Thirty" and that couldn't make me any happier. Just like in other Rucka books, there are no moments where the military characters interrupt their conversation, to explain what the code words or military slang they are using mean, for the benefit of the audience.
If I was going to have to rate this for Goodreads, I would say the book gets a 3. I like it, because I enjoy Rucka's style of writing, and I like his use of Wonder Woman's human military supporting cast, which is the inverse of what Azzarello was doing with the Greek God supporting cast members, during the new 52.