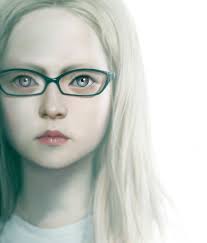 Every time I write a review of a book I read, with my, now, eight year old daughter, I post the list of all of the books we have read together, that are not Harry Potter books. here is that list:


I have a few more books to add to this list. I am far behind posting reviews on here. My goal, for Goodreads, this year was to read 100 books (which includes comic book trades). I have actually surpassed that number, at this point, but I have only written a review for five of the books. Hoo Boy!
The list above, of Children's books, that are not Harry Potter is in order from favorite, The School for Good and Evil, to least favorite, Harriet The Spy.
If I had to place The Girl with the Silver Eyes  on that last, I think I would rank it right under Bunnicula and just above Ramona the Pest.
5 out of 9 books? Is The Girl with the Silver Eyes worthy of being ranked below the halfway point? I think so. The main character is interesting, but I am going to have to go into Spoilers to explain why. Katie has the power of Telekinesis, the ability to move things with her mind. That isn't the spoiler. You learn pretty quickly that she has most of Jean Grey's powers. The Spoiler I am about to reveal is that Katie was born with her powers, because he mother worked in a factory, where she was exposed to specific chemicals. I am going to lob another spoiler at you - Katie isn't the only child who was born with powers, whose mother worked in the factory. I really do love this angle. Katie is not a very likeable character. She is almost always emotionless, with the exception of bursts of frustration or anger. She is seen as weird, by those around her, with the exception of a man who we are led to believe is a secret agent of some sorts.


I won't spoil the secret behind that man, but let's just say it takes the story in an unexpected direction.
Katie can't help her lack of emotion, just as she can't help herself from using her special powers. In this, we ARE able to relate to her - Wanting to know reason why she is who she is. Luckily, the book pays off and gives you all the answers you could possibly want. Sorry for spoiling a few of them within this review.