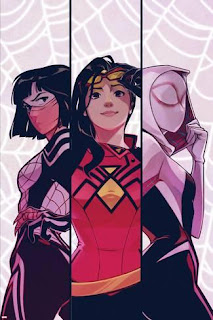 Mirror, Mirror, on the Wall, Who is the greatest Spider-Woman of them all?

You were expecting Jessica Drew, right? I am going to have to side with the host of Aurum's comics ( I can't remember his name, at this moment. For the longest time I thought it was Aurum). He believes that Jessica should be disconnected to all of the Peter Parker Spider-Mythos stuff, and have a new, non-Spider-Woman name.

Her origins have nothing to do with Peter Parker, which is the exact opposite of the other two Spider-ladies in this book - Silk and Spider-Gwen. Silk was bitten by the same Spider that bit Peter Parker, and Spider-Gwen is the Spider-Woman from another reality, where the radioactive Spider bit Gwen Stacey, instead of Peter Parker.

If I could rank the current adventures of each of these Spider-Women, it would go as follows:

What this book does a great job with is capture the distinctive voice of each of these three heroines. This book also does a fantastic job of drawing in all of the zaniness that fills up Spider-Gwen's world and ties it in with Silk's personal life. The art shifts dramatically from book to book, with each issue either being enjoyable to flip through or filled with cringe inducing character design. I love two out of three of these characters, so this book was at least three out of five stars for me, on goodreads.