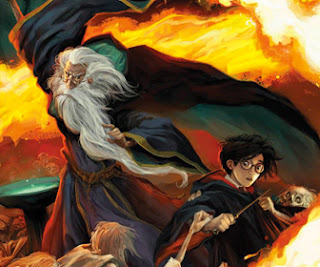 SPOILERS FOR HALF BLOOD PRINCE:

A week ago I reread my favorite Harry Potter Novel.

The first time I had read Half Blood Prince, I was focused on Voldemort and his delicious backstory. The second time around, as I read the book to my daughter, Pepper, complete with voices to match each of the actors of the film adaptations, I focused on the tragedy of Dumbledore.

I go back and forth about whether it is a good idea for me to be reading these last few Potter books to her. I know that JK Rowling's master plan was to have Harry Potter age at the same rate as his readers, and that the books increased in their level of Maturity, all the way up to the final book. Harry is sixteen, by the time of Half Blood Prince. Pepper is eight. I know girls mature faster than boys, but that is still a bit of a gap in age. I do feel like this book isn't beyond her ability to relate to it, though.

This picture above represents an aspect of the story that really stood out to me, this second time around. Dumbledore was always the wise Headmaster, guiding Harry along, but always keeping him in the dark. It was on the second reading, that I understood that Dumbledore truly was the Gandalf, or the Elminster of the Wizarding World. He was operating on a whole other level than all of his non-muggle peers. I think I focused so much on Voldemort's origins, the first time I read the book, that I didn't think about how uniquely powerful Dumbledore was. He was the massive beacon holding back the darkness, a superhero among Wizards.

Of course, book seven is all about Dumbledore, where you learn about all of his experiences, during his formative years, which led him to become the most powerful wizard of the time. I know that the recently released Crimes of Grindlewald is trying to generate fan excitement by connecting Newt Scamander's adventures to Dumbledore and Grindlewald's Teenage love inspired Rebellion. Unfortunately, I do not think the movie has done that compelling story justice.

I kept thinking, who is the JK Rowling character in these final books? The obvious answer for the first four or five was always, Hermione, the Well Read female character, whose research and cleverness is the true magic of all of these books. I considered Dumbledore to be Rowling's stand in, for this book- The almost God like being, who knows the horrors the world outside of Hogwarts is soon going to bring to Harry, and is doing everything they can to keep Harry from facing it.

All of Half Blood Prince's true action happens within the last hundred pages or so. The rest of the book feels almost like a drawn out stroll through the campus that you are about to graduate from. One last game of Quiditch, one last stab at finding romance. Rowling, just like Dumbledore, wants Harry to dwell in the happiness he finds in Hogwarts, but unfortunately has to take Harry to places that Voldemort tainted, in his past.

I have spent all of this time talking about Dumbledore, but I have to say, it was a true pleasure to read Voldemort's origin story to my eight year old daughter. I think we can all agree that the Dark Lord is one of the truly great villains of the Modern day, up there with Heath Ledger's Joker, and what Walter White eventually becomes. This book gave me the chance to show my daughter just how enjoyable reading about the Villain's story can be. It does the opposite of what so many god-awful prequels have been doing, since the time of the Movie that gave that term such a firm stance in our pop culture-The Phantom Menace. It DOES NOT make us feel sympathy for the villain. Sure, Tom Riddle had a horrible childhood, and his very conception was based on the twisted use of magic, but that doesn't mean we ever see him as anything except the Magnificent Bastard that he is.

As Dumbledore falls from the Astronomy tower, and Snape flees with Malfoy, I realize that this series will soon end for my daughter and I. There is one great battle still ahead for us to read, and a few more tears to shed. I am grateful that JK Rowling gave us this book, where villains created out of the true dark side of human (non-Wizard) nature, clash against fantasy book heroes, and we all finally, truly hear the call to adulthood.