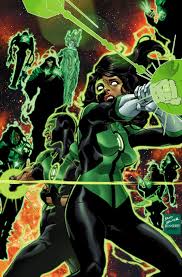 Please don't tell either Sam Humphries or Dennis Hopeless, but sometimes I get the two of them mixed up with each other. I understand how that might seem insulting. I certainly wouldn't want to be indistinguishable from another writer. I mean no insult, however. I don't think I have ever truly disliked a single trade I have read by either author.
I have been a fan of Humphries work on this book, and I am going to make it a point to focus on his other works as well, to get a true idea of his voice. Both Simon Baz and Jessica Cruz have distinct voices of their own. Jessica is the agoraphobic, paranoid shut in, who is just getting used to the idea that she needs to be out in the world, since it is her duty to save it.
Simon is a Muslim man, who decided to rage against the machine, by stealing cars, which utlimately led to his incarceration. So much of Simon's arc has been about trying to come to terms with his former criminal life and the price he had to pay for it. Simon is angry at the world, and Jessica is afraid of it.
Jessica and Simon have distinct personalities, yet their actual dialogue will, at times, seem very cliche. They constantly bring up how great pancakes are, and how they need to make a point to get pancakes as soon as they are finished Green Lanterning. It is a repetitive joke that wears out its welcome very quickly. It is the kind of dialogue that takes you out of the flow of the story, because you know it is placed there just because you need to have a funny, down to earth moment, in the middle of all of the Cosmic, Green Lantern Insanity.
The dialogue feels artificial, even though the characters speaking it are likeable and have definitive personalities. This spills over into the supporting cast as well. This is a small spoiler, but one issue focuses on a house party that Simon's Brother-in-Law and Sister hold at their house. At one point, during the party, Simon's sister goes crazy for donuts that are in the kitchen. She acts sort of similar to the mom in Transformers: Revenge of the Fallen, who has mistakenly eaten some pot brownies. She bounces off the walls, at the party, blaming it all on a sugar rush. It is too over the top to seem authentic. I wouldn't have complaints about little jokes like this, if they only happened once per book, or even once per story arc, but the "Drunk on Sugar" sister Joke and the "Simon and Jessica are desperate from pancakes" joke are repeated over and over again, in each issue they are in.
I have one more complaint about this issue- I don't like that characters that are from Colu, Krypton, and Tamaran and Mars are on Earth, 10 Billion years ago. It is too much of a stretch. How could these cultures exist for over 10 billion years? Each of these alien societies are far more advanced than Humanity, by the time the DC super heroes first encounter them, but they seem to be thousands of years ahead of us humans, not 10 Billion years ahead of us. I know, in a story where characters use their will power to charge rings that will create constructs made out of hard light, there is already a tremendous suspension of disbelief. The idea of all of these races already being able to travel through Space, 10 Billion years ago is too much for me to handle.
I know a spent a good portion of time complaining about this trade, but I still enjoyed reading it. Though their dialogue might seem artificial, Simon and Jessica are two great additions to the Green Lantern Mythology.