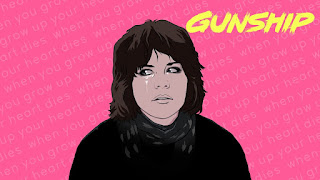 Within the past week I have become obsessed with a song.

Gunship: When you grow up, your heart dies


Specifically, I am obsessed with the way that it blends so well with the music video, that I just shared with you. I have just discovered Gunship, and I have to say, whoever came up with the idea of marrying the sound and lyrics of this song, to images of people re-enacting famous scenes from famous 80s movies, deserves a special kind of reward. It might be the "Knows how to Pull at Peter Marsh's Heartstrings Award" for 2019.

I knew upon watching that initial video, that there had to be a corresponding, fan made video,with the actual footage from the movies, that the people, in the first video, were trying to recreate. I was not wrong:

You know you want to see it

This second video brought me to a point of near transcendence, a state where I was almost able to forgive those who contribute to the stream of depressing news, and toxic thought that I have to (and I am assuming, you do as well) drink in, on a daily basis. As long as there were movies with such memorable scenes, that evoked a true feeling of wonder and Innocence, and some human had the decency to put them together, efficiently in a massive montage music video, then maybe the present day isn't such a bad place to live in. Maybe there is hope for the future.

Of course, right at that moment, that was when a depressing thought poked its shark's fin above the water. "The Future", I thought. Where are the movies of the 2000s, the movies that my children are growing up with, that will serve as counterparts to the movies featured in this Gunship video?

At first, I thought there were none, but given I had some downtime, I jumped into one of my favorite hobbies - Making lists.


Memorable movies of the 2000s

For the original Gunship Video, there are a handful of movies referenced from the 1970s, such as Jaws, and Blade Runner. The Bulk of the references come from the 80s, and a few movies from the 90s snuck their way in, as well (here is looking at you, Terminator 2).  I would say that the time frame for the movies referenced in the Gunship video was about 20 years- Just enough time to grow up and watch your heart die. Those references are totally aimed at a guy like me. As a child of the 80s, I enjoyed movies from the late 70s, and I was a full fledged wannabee screenwriter by the time I was a High School student, in the 90s. All of the movies on my list had to be from 2000, to the present day.

I do not think these are all great movies, nor do I love every single one of them. I put them on these lists, because I see images from them pop up in memes, Youtube video essays, and in advertisements, constantly, even if the movie that the images are from came out close to twenty years ago. Many of these movies are still referenced on Social Media, and on the many, many Youtube channels that discuss pop culture.

I put one asterisk next to movies that were based on books, two asterisks next to movies based on comic books and I put a dash next to movies that were primarily about young love, or adolescent issues. You will see there is a dearth of movies that feature young love or adolescent issues, on this list, and yet there are many movies from the 80s, that are classics, which are focused on just those two things. Maybe it is because the majority of those movies were either written or written and directed by the same person- John Hughes. There are no movies like Pretty In Pink, Breakfast Club, Sixteen Candles these days. There are no Cameron Crowe like films, either, No equivalent of Say Anything or Fast Times at Ridgemont High. That does trouble me.

The movies that are in bold are movies that belong in either category, on the list. Some of the bold movies are horror films that you might try to watch during a sleepover, during your pre-teen years. You know, the kind of movie you should not be watching at that age. Others are serious adult films, that have fantasy elements, that a kid these days would be able to watch, on TNT, and their parents wouldn't think twice about it.

Making this list made me feel better about the media that my children were going to grow up consuming. Of course, the classic movies from the 70s,80s and 90s will still be available to them, as well, I just think they will hold the same appeal that movies from the 40s,50s and 60s held for me. As a kid, I wouldn't put in an effort to seek out movies from before the 70s, but if my parents sat me down to watch a particular film, like Planet of the Apes, or On the Waterfront, I would appreciate the quality of the storytelling, regardless of how old the film might have seemed to me.

It is crazy to think that there have been billions of dollars, spent within the last two decades on lukewarm movies that will never make this list. There are dozens of movies that have cost over a hundred million each, that have tried to either reboot or be a direct sequel to the movies referenced in the Gunship video. Almost every single one of these attempts have ended in failure, an unnecessary film that brings nothing to the cultural zeitgeist.

I am optimistic, after making my list. I wonder what kinds of film we will see within the next two decades. Perhaps the bubble that is covering the production of all of our modern films, a bubble made almost entirely of comic book adaptations, sequels and reboots, will eventually burst. I don't know, maybe it wasn't when we got old our heart died, but maybe it was when John Hughes started making movies like Babies Day Out. Within a few years after his swath of Teen movies ended, studios thought raunchy sex comedies, like American Pie and Road Trip were the best representation of how Youth acted and felt. A few years after that, post 9/11, and the only youth that we cared about in movies were the ones that were destined to grow up and become Superheroes or Jedi.

I know, that within 30 years, my two daughters will most likely be either rafting to school, due to the flooding caused by the melting of polar ice caps, or they will not be able to leave climate controlled buildings, because it will be far too hot and dusty for humans outside. Maybe they will be survivors of the great plagues, or they will befriend robots that are working to restore order, after the massive upcoming economic collapse. Until they reach that time, though, can they have their own, original movie, that is at least as wonder producing as a classic, from the 1980s?