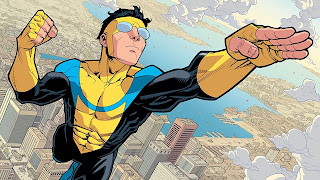 The first issue of Invincible came out in January of 2003. I had just turned 21 and I was still impressed with myself for

A) Be Legally able to purchase alcohol for a New Year's Eve Party
B) Being legally able to rent the hotel room, where my friends and I were able to connect multiple TVs, and play Halo against each other, while drinking said alcohol.

I know, it is not really something to brag about. What can I say, I was newly 21, and Social Media hadn’t completely drained us all of any kind of fun, whimsy and wonder, yet, leaving us with only bitterness and the need to be ironic.
Would Invincible last for fifteen years, if it was released today and not in 2003? If an ad for it was posted on Social Media, there would be a dozen or so comments saying that this Superman Archetype should have been African American, or Muslim, or Female. Another dozen or so comments would begin with the word Yawn, followed by a list of all of the superheroes whose costume Invincible’s ripped off.
Sure, we had that second set of comments, back in 2003, already, but if I recall, there were more people willing to test out a new creator owned book, than instantly dismiss it.
Those ignorant enough to Mock Invincible’s costume don’t deserve the fun that was in every issue of the book. His Logo is a Damn I, for Invincible, and it also happens to be the Image Logo!

In the fifteen year run of the book, other Image titles have come and gone, and many of those will be credited for Image’s current reign as the destination for quality, original, creator owned comic books. Even Invincible’s creator, Robert Kirkman has another Image book, that will get far more credit for the Independent Publisher’s success - The Walking Dead.

No one wants to give this book the credit it deserves, because it is too similar in look and format to the Superhero books of the Big Two (Marvel and DC). Invincible is the perfect title for this book, because for an original Superhero comic, to last for 15 years, and to end, only when the creators chose to do so, means the damn character is Invincible.
I know the book has fans. Everyone one of these massive collector’s editions has a series of sketches that Ryan Ottley drew, on request, at Conventions. People ask for specific Invincible characters, and there are dozens of them, each memorable.
In this last Volume, some of them leave us forever. This book has, since Issue 7, had ludicrous Superhero related violence. I knew that more characters were destined to meet gruesome ends in this book. I do have to say that I breathed a sigh of relief, seeing that no characters were killed off just for shock value, that every single death, in this last arc had meaning to it.

I think about Invincible’s Daughter, Terra, a lot, as I look back on this Ultimate Collection, and the collection before it.

My own daughter was born right in the Middle of Invincible’s 144 issue run. Terra only showed up within the last twenty issues or so. SPOILER - We do see Terra eventually grow into adulthood by the end of this story. Even though Terra’s time in the book was only about a seventh of the entire run (I probably did that math wrong), she has left quite an impact on me. I am really proud of Kirkman for capturing the voice of a female character, from Toddler, to Child, to Teen, and finally to young adult.
I wish all comic book characters could grow in age, alongside their readers, instead of keeping them perpetually in their twenties. Spider-man would be a Grandfather right now.

I know Spidey is an inspiration for both Kirkman and Ottley. Ottley has even gone on to draw Spidey, after doing some of the best work in comics, on this book. The difference between Invincible and Spidey, however, is that Spidey still has to play by Stan Lee’s rule - “The Illusion of change”. Yes, many iconic things have happened to Peter Parker, in the decades the character has been around, but he isn’t going anywhere, and he is still probably about 25 years old, even though he was 25 when I first started reading comics, at the age of 10. He is still in the same type of adventure, and his marriage has been retconned out of existence. The only time the Spider has spawned children has been in other realities.

For Mark Grayson, Invincible, I have taken the journey with him. He was a little younger than me, when we first met (Invincible was in his late Teens in the first book. I was in my early twenties) and now, SPOILER who knows how old he is, by the end of the book, while I am thirty six. I am so very grateful that fans of the book kept buying it, and that Kirkman and Ottley filled every issue with love for the many characters they created.