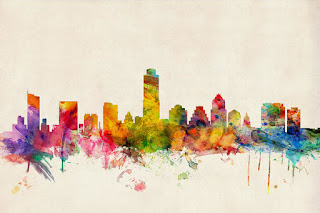 For years, I have said nothing publicly.

I haven't discussed my political beliefs online, since before my 9 year old daughter was born.
Often, I think it is because I am a coward.

What do I fear?
The worst case scenario- the United States eventually becomes a Police State, and those that disagree with the ruling government are imprisoned, tortured and executed. Before I would even reach that point, my shame at my own stupidity would kill me. Posting something negative about the ruling party? The Trump Party? The American Party? on Facebook? On Twitter? Why was I ever so foolish?

I know, that sounds dramatic, but on a daily basis, I see the signs of an infection that could eventually lead to that completely poisoned future.

The other, more likely scenario that I fear, is having to respond to relatives, co-workers and friends, who see the other point of view. I often struggle with my words, and I fail to provide strong examples. Even though there are many who I believe are wrong, I feel like I am not strong enough to prove it to them.

What is the point of proving to someone that they are wrong? Does anyone ever accept that? The only thing and the most positive thing we can do is help those that are undecided, those that are willing to listen.

So, here we are, at another outrage. This time, Trump has tweeted about Congresswomen who should go back to their original countries. The gall of him! Each of these women are American Citizens! The current President of the United States, in possibly his most blatant racist attack yet, has reverted to the old "Go back to your own country" line, the signature line that lazy writers put in the mouths of racist characters. It is cliche. It was cliche, when I was a teenager in the 1990s, and when Trump tweeted it, two days ago, it has been the focus of all Social Media.

I am focusing on this now, because a writer that I respect dearly, Brian Koppelman tweeted that this was the moment. This was the moment that Trump is showing everyone his cards. He is showing how low he is willing to go, to see if he gets a reaction. I am not quoting Koppelman directly, but that is the gist of his tweet. He then wrote this excellent post on how we should not call Trump "Mr. President"

How I would love for this to be that moment. The moment when the Republicans turn on Trump. When Democrats can no longer accept the Inept Leadership of the Democratic Party. We would need to go further, though. Trump is despicable. Besides villains in Fiction, I can't really think of a real person who seems so delusional and beyond redemption. He is playing his part.

Yes, I do believe that Corporations want to gain as much of our private information as possible. Yes, I do believe that a large portion of the Wealthy 1% of this country are racist, Sociopaths, who care nothing for the benefit of the masses. The Republicans are puritanical bigots, living in the 1950s. The Evangelicals will become complete and utter hypocrites, as long as abortion is made illegal.

I believe all of these things, but I also believe that there are Democrats that have sold out, and will continue to sell out the people they represent. I believe that there are causes that Liberals champion that fill up our Twitter feeds, and all other forms of media, and Social media that are important, yet do not need to be championed as strongly now, as say trying to prevent global warming, or education reform, or a creating better healthcare system.

I am vague, because I am a coward.

Trump is the focus point. We spend all of our energy on him. In the game Hearthstone, there is a power that certain cards have called "Taunt". When someone plays a Taunt game, all of their opponents attacks focus on that one card, keeping the one who played it out of danger.

Trump is the ultimate Taunt card. If we were to truly be AWAKENED, we would all block him, or silence him on Twitter. We would ignore him, and we would rally together against those that have been wealthy for generations, and those that run the largest corporations.

I really wish I could help with that rally. I want to do more. I will post this on my blog, and no one will read it (at least any time soon). I just needed to write this out. Hopefully my daughters, who are currently 9 and 3 years old, today, will one day read this, and know that even though their father was ineffectual, he still dreamed of an awakening.