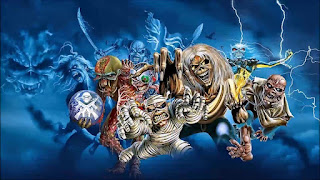 My friend Bruno recently introduced me to the Joyous experience of being an Iron Maiden fan. Metallica was my Metal of choice, when I was introduced to the genre, in my early teens. I would eventually go onto more niche bands, like The deftones or System of a Down, with the Occasional Slipknot. I had only heard Run to the Hills once or twice, but I always considered it to be a corny song. If I wanted to hear an over the top metal band singing about Swordplay, I would listen to Manowar. Little did I know, there was an entire world filled with devoted fans of Eddie (The Mascot for Maiden) who could sing along with every single song, from Fear of the Dark to For the Greater Good of God (My two favorites). Brazil is filled with Maiden fans, according to Bruno. I was surprised I had neglected such a wonderful fandom. Almost every single person in attendance in the San Antonio Stadium had a shirt with Eddie on it. I had never seen so many band shirts, for the band I was actually seeing, at the show I was at, then the night I saw Maiden.
What the hell does this have to do with Wheel of Time? Well, I think with Metal, you can go down certain paths. You start off with Metallica, Iron Maiden or Megadeth. Maybe throw Pantera on there. From those different starting points, your path goes in different, though slightly similar directions. I am thinking Pantera fans eventually become Slipknot fans. I think Megadeth fans eventually become Periphery fans. Metallica fans become Avenged Sevenfold fans? Maybe I am a little off with those.
In fantasy, I think there are gateways as well. There were those of us that were into Tolkien before the movies made it cool. I don’t know why I said “Us” I have only started the Silmarilion and The Two towers, and have finished neither.
Then there are those of us that got into fantasy, through D and D. We either started with the tie in Novels, or we started with the game and then moved onto the novels. This is my group. The same guy that got me into Metallica (and therefore Metal, in general) is the guy that introduced me to Weis and Hickman’s Dragonlance books. He was a rather philosophical High School Freshman, who wanted me to know that Balance was the Key to life. Well, if you ever wanted a fantasy series that drills the importance of striking a balance, it is the Weis and Hickman Dragonlance books. I devoured all of the adventures of Tanis Half-Elven, the twins Raistlin and Caramon and of course, Tasselhoff Burfoot.
From there, I moved onto the other major D and D inspired series - The Dark Elf books. I followed Drizzt and his companions for close to a dozen adventures, before I dropped off from Fantasy books for a while.
Now, just as I had discovered the magic of Iron Maiden, at the age of 36, I also discovered another Fandom that I had been disconnected from - The Wheel of time Fandom. I have been disconnected from the Source, maybe I was Gentled at some point, in my youth.
I worked in bookstores, from the age of eighteen, til about twenty-three and I used to relish the end of every shift, when I had to straighten up the various book sections, to find myself in the Fantasy/ Sci-Fi section.
In there, were all of the George RR Martin books, which I with ease devoured. Hey, did you know they would let you rent out books when you worked at Barnes and Noble. Borders or Waldenbooks? Do you even know all three of those stores?
Besides A song of Ice and Fire, the Lord of the Rings stuff, and my beloved Wizards of the Coast (D and D’s current imprint, they used to be called TSR, back in the day) there were the Wheel of Time books. There were so damn many of them, too, and at that point, Robert Jordan had died, and there was no mention of who might eventually finish the series.
I remember looking over the covers of each book in the series, and wondering who the Guy holding up the Glowing Sword was. What was up with the Guy in the Samurai Outfit, on horseback, guiding what looked like a Royal Maiden next to him. What were those Goblin looking creatures, and what were they going to do with that Horn?
Well, I finally found the answers to a few of those questions.
The Samurai looking Guy is Lan. 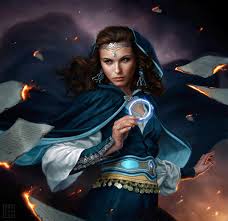 I am really glad I met him, and Moiraine, the Royal looking lady riding next to him. Hell, I am down for more stories of  Perrin and his (SPOILER) yellow colored eyes. Most importantly, though, I want more of the Bad guys. Give me as much as you can on the Darkfriends. I was pleasantly surprised with how horrific the bad guys were, considering that the heroes seem almost cliche, in many regards, and certainly seem like they have been lifted directly from Lord of the Rings. I want to know more about confident villains whose flesh seems like it is going to fall off of their body or the Fire eyed Antagonists who torture Rand and his companions in their nightmares.
To tie it all together, I think that being a metal fan is similar to being the chosen one in a fantasy story. You start out innocent, feeling like there might be something wrong with you, or that you are an outsider. Then, you get exposed to Magic (or in this case, Metal) and you feel awakened. You want more. For once, it seems like people understand you. There is a reason why you are different. Not only that, but it is common to want to create Metal of your own, so you learn as much as you can about it. You want to be like the true Wizards that you look up to.
Metal, like Magic can go in the wrong direction. Taken to far, you become violent. The rage felt within the music becomes a weapon to use against others. You have to monitor yourself, to make sure you don’t find yourself going too far down, dark paths.
This is my way of describing my personal experience of reading Eye of the World. I recognized many things within the first book of the wheel of time, things from Dragons of Autumn Twilight, things from A Game of Thrones. Eye of the world, and its sequels came out relatively close to these other books. They are all part of a surge of fantasy books from the Mid to late eighties, through the early nineties. Metal had its hay day, during a similar time frame.
I miss those days, honestly. The world seemed like  a brighter place. Now, I feel like Loial, talking about an age that is now long gone.


Perhaps the Dragon will be reborn, and Metal and literary fantasy will rise again. Until then, I think we might have to deal with a few more false dragons. Sorry this barely referenced Wheel of time.